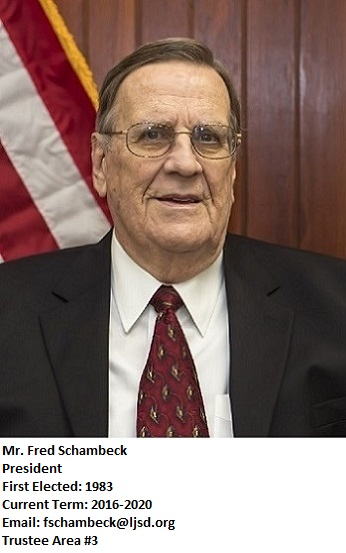 Mr. Fred Schambeck is the President of the Lowell Joint School District Board of Trustees, and has been a member for 35 years.  He has served in a variety of roles including President, V.P. and Clerk many times over.  Mr. Shambeck was a founding member of the Lowell Joint Education Foundation and received a Lowell Joint Education Foundation Dedication Award for his many years of support for the school district.  He was a pioneer in implementing Computer Technology in the Lowell Joint School District and was one of the creators of the Rancho Starbuck Library-Media Center for students.   Because of his many years of service, he received a Citizen of the Year Award in 1996 by the La Habra Area Chamber of Commerce as well as the Legacy Award given to him by the City of La Habra.

Mr. Fred Schambeck has a long history with the Lowell Joint School District as well as the surrounding areas.  He has lived in the district since 1969 and all three of his daughters attended Macy Elementary, Rancho Starbuck Intermediate School and then went on to graduate from La Habra High School.  He currently has 4 grandchildren attending schools in the district: one at Macy Elementary, two at El Portal and one at Rancho Starbuck.  Fred received his Bachelors degree from The University of Southern California and his M.B.A. from Pepperdine University.

Fred has been a tremendous asset to our Board as well as to our community and we are lucky to have him as part of our Lowell Joint family.